This has been the hardest entry for me to write. I have been thinking about it for a couple of days. I can’t believe I come home in 2 days; I have been here for 49. These have been some of the scariest, most exciting days of my life. I had an hour yesterday to sit and reflect. I read back through my journal and realized how much I have seen, learned, and done. I have learned so much about the places I have visited and myself. My beliefs, my abilities, my faith. I can never say how much this trip has changed me. I spent the last few days on the Isle of Skye. This is an island that sits to the north west of Scotland. We crossed over by the land bridge and I saw some of the most beautiful places on earth, in my opinion. We hiked along the ridge of the Cuith Raing or Quirang, in Gaelic. As I hiked, I felt no fear of the heights but just looked around in awe at the beauty. We got lucky and had some of the best weather Scotland has seen all summer. The hills were so green and the sky was so blue. We stayed in the small town of Portree. On the whole island there are only 10,000 people. After the failed Jacobite rebellion of 1745, the English came in and started what basically amounts to genocide. They replaced clan chiefs with English lords and forced thousands of people from their homes burning all of their possessions as they went. The clans were no longer allowed to speak Gaelic, wear kilts, play bagpipes, or do anything we find iconic about the Scottish people. Thousands of people were killed or forced to leave the land their families had been on for generations. And while a lot of these regulations have obviously changed, the people of Scotland are still part of the United Kingdom. But possibly not for much longer. In 2014, they will hold a referendum to vote for independence. It is easy being here, to hope it goes through. The next time you will hear from me will be after I get home. I hope you have learned some things from me and have enjoyed my blog. See you soon! 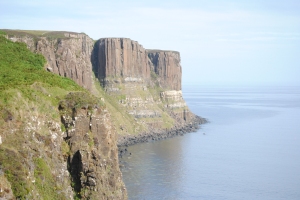 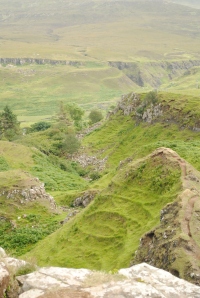